My submission as a part of #CrumpledChronicles by ArtoonsInn. 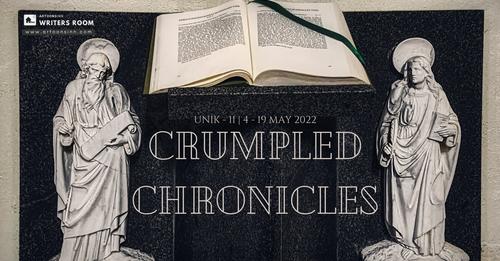 The cold December breeze blatantly tussles the scanty locks adorning my scalp. Not that I am complaining. It’s a luxury compared to that obnoxious cell they call solitary confinement. I look around the paddy field that had been barren for more years than my Lajjo’s womb after she delivered our first and last born, Atman.

My thoughts immediately drift to my puttar. He must be six years old and creating a riot in the village just like I did. But the nostalgia is soon replaced by a throttling rage. The volcano in my core has erupted many times, but it’s still not silenced.

I fear I shall lay to dust many more coming in my way like I did those children.

All bloody migrants… leeches. The parasites ate up our jobs and lowered our daily wages.

What was my fault?

I teased a young girl in a pink frock and pinched her freshly grown globes. She was just a migrant kid with a  bleak future, all set to be a whore. So, why did they hit and hand me over to the law?

Eighteen months of my life were wasted behind bars because of these roaches. I was the son of the soil, wasn’t I?

Lajjo left me for good and remarried while I craved for Atman. I decided these scroungers would pine too… for their children. I shall make them.

That’s when I struck gold. I dragged that Jawahar’s son Raja, all of three. Jawahar was at the forefront when they showered blows on me and gave his testimony.

It was a quick job… breaking that slender neck… just like we decapacitated the hen in our village.

I then made a lightning-fast move and kidnapped two-year-old Rinku sleeping blissfully on the charpoy outside her shanty. Her mother had tempted me umpteen times but left me burning. I decided to douse that fire as well. Boy… she was so tight…

The girl wailed her lungs out, and I had to clamp her mouth. She stilled soon, her eyes going lifeless as her bleeding body.

I buried her alongside Raja, when the crescent moon shied away from its usual luminance right in this field at night.

A blow on my head jarrs me from my stupor.

“You Mother [email protected]%#$%r… Are you taking us for a ride?” the investigating Inspector explodes even as his lowly underling rains a baton on my back.

It hurts hard. These young boys don’t know me from my prime. Even if they were four up against me, I would have taken them down. But now, at 45, I am weak, especially having spent the last few months chained in that dark hellhole. My hair has greyed tremendously, and a lot of it has fallen away… deprived of nutrition.

“No Sahib…” I shake my head. “… It’s right there. I pointed toward a landfill that was slightly raised. The morons had to call the CBI to investigate when all they had to do was dig that landfill.

I strut toward the landmass dragging my right leg, which had probably broken and mended faultily because of the lathis, that rained on me during interrogation. These buggers didn’t know what it meant to be deprived.

A robust mephitic odour greets me as I reach the site, and I almost gag. I would have thrown up, but I hadn’t eaten anything for the past twenty-four hours.

The food in that pigsty they call prison needs an upgrade…

Inspector Radheshyam Tiwari, the investigating officer for the CBI, held his spotless white handkerchief even as a couple of constables threw up their lunch. Then, he gestured to the hired help to begin the dig while the AV unit was instructed to record it.

They didn’t have to do much, and within a few strokes, a decomposed version of what should have been a child’s hand emerged out of the fill. He walked closer to the discovery, unmindful of the stench. As the digging continued, mangled corpses in different stages of putrescence were unveiled. The still visible abrasions and crusted blood around the infested wounds on their tiny bodies would haunt the Inspector for years to come.

It was clear that the children, all below five, were abused in every possible manner.

Inspector Tiwari wanted to gather enough evidence to nail Singh. He had to have an airtight case. Singh had already had two acquittals due to the archaic handling of the sensitive evidence by the local police. This was huge, though.

He would take this case to its logical end by taking Singh to the gallows.

I don’t know why these idiots are making a fuss out of nothing. I successfully got rid of a few migrant groups from the shanties. These bums should be thanking me instead.

“Kaminey… how many did you…?” the Inspector named Tiwari, yet another outsider here, struggles to contain his rage.

“Seventeen Sahib…” I confess, and my heart expands with pride. “… there is another one at the far end of the field….” I point towards another handiwork of mine.

I feel the blow to my solar plexus before I see it coming. My reflexes have slowed down… does age do that to a healthy, virile man?

I pant in agony, but another blow lands on my lips. I taste blood. Did I break a tooth?

“Sahib… I had desi too; the bottles must be there as well….” I declare confident in our obsolete judiciary even as I see how these dimwits gather evidence haphazardly.

The Inspector stares daggers. Is it because of my matter-of-fact expression?

I have no regrets…

This is based on a true-life incident. The following reference can be checked out for more information.