Here’s our winning entry for a contest on www.beyondthebox.in. We had to write together and within 800 words.

60 teams participated in Season 2 of this one-of-its-kind contest and the winners were chosen by best-selling author MV Kasi. Below prompt was given to the writers and they were asked to narrate the same story from two different points of view.

Prompt – Write a fictional story in which a viral video plays a key role. Feel free to creatively interpret this concept in any genre of your choice.

The winners in the Adults’ category were Akshata A. Hegde & Priya Nayak-Gole 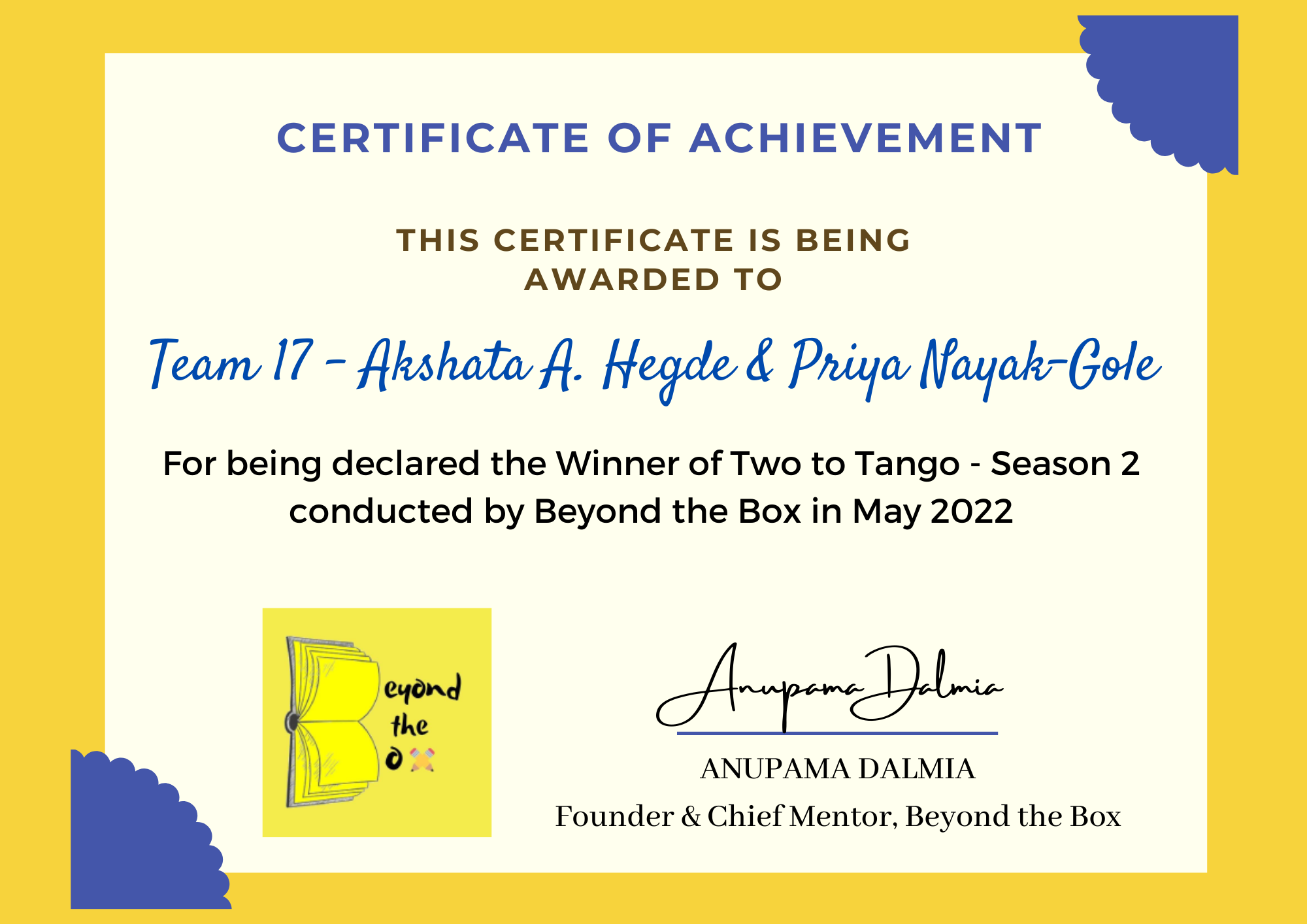 “…. The most heinous crime… severed head of acclaimed singer Radha Madhavi… recovered from the overflowing sewage plant. Singer had disappeared a week ago …” the hypernasal background voice boomed in the staccato buzz of the low fidelity microphone. The police inspector in charge of the case was seen talking to the hospital authorities, his ‘Maa Bhavani’ locket peeking out of his shirt, gleaming at the camera…

Dhanush dropped the hammer used to adjust the Tabla resonance. The news was abuzz with a viral video of his incognito ex.

So why did Radha come home that evening a month after they separated? Everyone had heard them scream profanities at each other before she left, banging the door out of its hinges.

Radha was last seen emerging out of his apartment complex. Since then, the police had hounded him. His credibility was under the scanner; Overnight he was under trial by the media, declared an abusive husband, a megalomaniac, and adorned with every psychobabble defaming his hard-earned reputation.

Radha, portrayed as the victim of marital abuse, was a wolf in sheep’s clothing. She had been at the peak of her singing career when she had had her tryst with substance abuse.

But… did she know about his extra-marital flings?

He  had finally pulled down the curtain over their ill-fated relationship. But Dhanush shuddered as the world stilled.

He would now be made the scapegoat.

With trembling hands he picked up his mobile phone and speed-dialed the one whom he reckoned, had his back. They hadn’t spoken for while, but Dhanush was sure help awaited him.

He redialled, umpteen times, but the call went unanswered. Why the avoidance, now when they had shared so much…

Teary, Dhanush stared at the tiny instrument that had engulfed the world in the garb of technological advancement.

He typed yet another text.

His painful journey was set to come to a thunderous close!

The pain, agony, and shame had fused into a bloody rage a while ago and the result…. felt deeply cathartic.

Closing his eyes briefly, he clasped the trinket that had borne witness to his downfall.

No one knew his truth.

He had carefully chosen a profession that redefined authority and masculinity, and for a while, that was his erstwhile cocoon. Late nights and his whereabouts were never questioned. After all, he had a permit to scour the city.

Then he met Dhanush.

A maestro and a popular socialite, Dhanush was regularly plastered across the social page of the newspapers.

The flattering part was Dhanush chose him.  That bar and that fateful room key he placed on the table….

He discovered Dhanush was insatiable and as for him, he had never felt so wanted before.

The morning after, Dhanush exchanged numbers before he left.

It soon became a regular rendevouz. Wednesdays and Fridays.

Dhanush being very much married, never stymied their escalating frenzied passion. And they had conversations after. Banter.

Memorably, Dhanush teased him often for his middle-class ways, especially the religious trinkets on his being.

He knew he was in love. And that is when it spiraled…

What started as a hesitant question escalated into an insistent pleading to leave Radha….

Finally, one day, Dhanush had enough and rolled his eyes.

Looking straight at him, Dhanush pulled out a cheque book from his bag, scribbling as he spoke the dreaded words marked to be a blood wound…

“You are taking boinking way too seriously, rentboy” Casually smiling, he added, ”Time to part ways. Don’t worry about compensation!”

Stunned, he watched as Dhanush left the cheque on the bed and walked away….

Rentboy…. The offensive word was branded in his heart but the knife that sawed it completely came a few days later…

He was the security at Radha’s concert. As it happened, he had to escort her to her car after it ended.

She looked at him when he approached her. He almost stepped back at the intense dislike and …. Was that disgust?

As they navigated through the crowd, someone tried to grab her. He reached out instantly, trying to shield her. She turned around and pushed him away with sudden violence…

The seemingly deafening silence that followed turned him into stone. Inside him, the eddies gathered quickly…

Decapitating Radha and having her blood splatter had felt like his burning soul had been doused with ice-cold water.

Releasing his vise-like grip on the trinket-  his “Maa Bhavani” locket, he flexed his fist.

Looking straight into the camera, his rehearsed words were measured as he brought the focus of the world on Dhanush.

To be hanged, drawn, and quartered. Soon.

His phone beeped. Dhanush blinked on the screen, ‘ Prish…Please answer!’